Disaster Film Wiki
Register
Don't have an account?
Sign In
Advertisement
in: Pages using duplicate arguments in template calls, Films, 2014, Into the Storm

View source
watch 01:40
The Sandman Will Keep You Awake - The Loop
Do you like this video?
Play Sound
Into the Storm 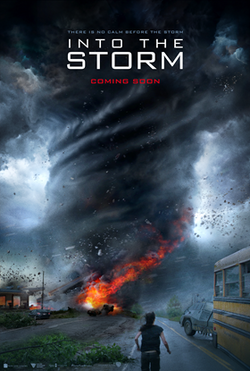 Into the Storm is a 2014 American found footage disaster film directed by Steven Quale, written by John Swetnam, and starring Richard Armitage. The film was released by Warner Bros. Pictures on August 8, 2014. It is a meteorological disaster film about a rash of tornadoes striking Silverton, Oklahoma. The film received mixed to negative reviews from critics.

A group of high school students document the events and aftermath of a devastating tornado.

A group of high school students are in a car together as a storm is brewing. When the storm gets worse, the kids look up ahead and see a tornado approaching. A girl begs for them to go, but the boy recording on a camera gets out to video tape the tornado. He gets back in the car, but the tornado picks them up before they can escape, killing them all.

In the town of Silverton, Oklahoma, the local high school senior class is preparing for graduation. The high school's vice-principal, Gary Fuller, has asked his two sons, Trey and Donnie, to record messages from the seniors for a time capsule to be opened in 25 years. Elsewhere, Pete, a veteran storm chaser, has been attempting to intercept and film tornadoes using a heavily armored vehicle nicknamed Titus, but has come up short all year long. Upon learning of a major line of developing storms, the chasers confer and decide to head for Silverton in hopes of filming tornadoes. After arriving in Silverton, the team discovers that the cell they had been chasing has dissipated, upsetting Pete. As the team reconvenes to determine its next move, the Silverton cell abruptly strengthens, resulting in a hailstorm and tornado. As the team films, the funnel abruptly shifts course and heads for the high school.

At the high school, the senior students are participating in commencement ceremonies when the weather suddenly sours. Moments later, the tornado sirens sound, and the students are subsequently marshaled into the school building by the head principal and his staff. In the aftermath of the tornado, shaken students emerge from the damaged building to view the destruction, while Gary sets out to rescue his eldest son, who had gone to an abandoned paper mill to help a friend with a project; both were subsequently trapped when the tornado brought the building down on them.

As Pete's storm chase team stops in a small part of town, a tornado takes shape just as Gary and Trey arrive, destroying several buildings. Everyone except Gary and Pete's meteorologist Allison Stone make it to safety, while the two are almost killed before the twister dissipates. Then, after Gary pleads for help, Pete's team agree to help Gary get to the paper mill. While en route to the mill, another round of erratic tornadoes forms and encircles Pete's team, in the process destroying a residential neighborhood and a car lot. An explosion turns the tornado into a firenado, which Jacob (Jeremy Sumpter) tries to film, only to be caught up in the storm and is killed. This causes friction between Pete and his team, as Pete's concern seems to be more on collecting data than ensuring his team's safety. After recovering their vehicles, Allison leaves with Gary to continue their trip to the paper mill.

At the mill, the two trapped students attempt to use their phones to call for help, but the storm's devastation has rendered the phones almost useless. To make matters worse, a water pipe abruptly breaks and begins to flood the hole in which the two are trapped. Injured and at risk of drowning the two record messages for their loved ones, then prepare for the worst. At the last minute, Gary and Allison arrive and successfully free the two students.

In the skies above Silverton, a convergence of tornadoes results in a colossal EF5 tornado that threatens to level the town. The town's citizens have taken shelter at the school, and Pete's team, however, determines that the school's storm shelter will be inadequate in the face of the monstrous tornado. Unable to alert the school's staff with mobile devices, Pete's team rushes to the school to notify the citizens that they must evacuate. While citizens rush to board school buses to flee the advancing storm, Pete and his team move to track and follow the storm, but the last school bus and a handful of cars are cut off from the retreat due to a downed transmission tower.

In an attempt to improvise a shelter, the storm chasers and school refugees take cover in a storm drain, but debris from the tornado damages one of the storm grates, compromising the shelter. In an attempt to save lives, Pete hands over his research hard drives to Gary, then sacrifices himself by leaving the shelter to move Titus down to the storm grate, where a combination of the vehicle's weight, ground anchors, and winch cable are used to anchor the storm grate to the concrete face. Titus's equipment proves unable to anchor the vehicle to the ground, and the tornado picks up the vehicle. From the camera turret aboard Titus, Pete observes the eye of the tornado as the vehicle is lifted above the clouds and it then crashes back down to the storm drain, killing him instantly. Shortly thereafter, the EF5 tornado dissipates.

In the aftermath of the tornado outbreak, the townspeople begin efforts to clean up and rebuild. As Gary's sons move to complete their time capsule film, many of those they interview after the tornadoes express a newfound appreciation for their lives, and a hopeful outlook on life.

On October 28, 2011, New Line Cinema has bought the "found footage" natural disaster film's script written by John Swetnam, and Todd Garner will be producing the film through his Broken Road Productions. On January 5, 2012 it was announced that director Steve Quale was set to direct the film currently untitled as "Found-Footage" Tornado thriller by New Line Cinema.

On April 24, 2012, Variety revealed that New Line has given the green light for their next film project about a tornado of Category 6, that the film was in development and set to begin shooting on July 9 in Detroit. On August 23, 2012, the untitled "Category Six" Tornado project film got the title Black Sky, currently filming in Detroit. On September 24, 2013, New Line retitled the film to Into the Storm and set August 8, 2014 as a release date.