View source
watch 01:36
We're Getting Mutants in the MCU - The Loop
Do you like this video?
Play Sound
The Core 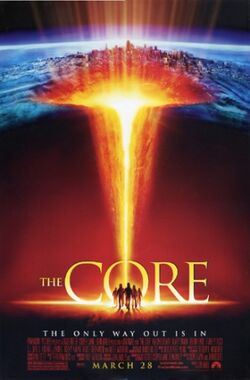 The only way to save Earth from catastrophe is to drill down to the core and set it spinning again.

A series of disturbances caused by instability in the Earth's magnetic field lead geologist Dr. Josh Keyes (Aaron Eckhart) and scientists Serge Leveque (Tchéky Karyo) and Conrad Zimsky (Stanley Tucci) to learn that the Earth's molten core has stopped rotating; within a year, the Earth's magnetic field will collapse, irradiating the planet. The three develop a plan with the United States government to bore into the Earth's core and plant a series of nuclear charges at precise points to restart the core's motion and restore the field. A former colleague-turned-adversary of Professor Zimsky, the rogue scientist Ed "Braz" Brazzelton (Delroy Lindo), has developed plans for a nuclear powered vessel that could quickly drill through to the core aided by a high frequency pulse laser, with a hull made of "Unobtainium", an indestructible metal that can withstand the heat and pressure of the core. The government funds the construction of the ship, which Brazzelton names Virgil, while Keyes enlists the help of computer hacker Theodore Donald "Rat" Finch (DJ Qualls) to keep news of the potential global disaster off the Internet and stem a worldwide panic.

Virgil is piloted by Space Shuttle pilots Commander Robert Iverson (Bruce Greenwood) and Major Rebecca "Beck" Childs (Hilary Swank). The Virgil is launched through the Marianas Trench from an offshore platform. The team accidentally drills through a gigantic empty geode structure, damaging the lasers when it lands at its base and cracking the geode's structure and causing magma to flow in. The crew repair and restart the laser array in time, but Iverson is killed by a falling crystal shard while returning to the ship. As Virgil continues, it clips a huge diamond that breaches the hull of the last compartment. Leveque sacrifices himself to save the nuclear launch codes before the compartment is crushed by extreme pressure.

Virgil eventually reaches the molten core. The new data they gather there reveals a flaw in the plan. The outer layer of the Earth's Core is less dense than anticipated, and the explosions cannot generate the needed power. After some calculations, they decide that by splitting their nuclear weapons into the remaining compartments and jettisoning each at specific distances, they can create a "ripple effect", where the power of each bomb will push against the blast of the next, generating the needed energy wave. However, because Virgil was not designed to jettison undamaged compartments due to rushed design, the plan requires someone to deactivate a safety switch that is in an area exposed to the extreme temperatures. Brazzelton volunteers and deactivates the switch, dying shortly afterwards.

Meanwhile on the surface, the public becomes aware of problems after super storms start to cover the world. Finch is unable to stop worldwide panic but instead learns of the top-secret project "DESTINI" (Deep Earth Seismic Trigger INItiative), which is to be deployed if the Virgil mission fails. Finch relays his information to Keyes, who discovers that Zimsky was one of DESTINI's lead scientists. DESTINI, according to Zimsky, was designed as a weapon to propagate earthquakes through the Earth's core, but its first activation has unintentionally stopped its rotation instead. Zimsky reveals the government will use it again to attempt a restart of the core. Keyes is convinced it will have disastrous results, so he has Finch hack into DESTINI's system and cut its power supply to buy the Virgil more time. Keyes and Zimsky realize they have miscalculated the necessary yield, but Zimsky gets trapped in a detaching compartment. Zimsky suggests they use the ship's nuclear fuel to achieve the sufficient yield, which will save the planet but leave Keyes and Childs without power.

As the triggered explosions go off, successfully restarting the core's rotation, Keyes and Childs realize they can use the unobtainium shell to convert the heat and pressure from the wavefront to power the Virgil, and they are able to escape the core. They break through the crust underwater, leaving them on the ocean floor without power and communications. They believe themselves lost but use the remaining power to activate a weak sonar beacon. The beacon attracts a nearby whale pod, and Finch is able to trace their whale songs to locate the Virgil. A week after the mission, Finch logs onto a computer at an internet cafe and releases the information about Project DESTINI, the Crew of Virgil and their mission onto the Internet.

The movie garnered mixed reviews. The film received 41% positive reviews out of 153 reviews, with an average rating of 5.3/10 at the movie review aggregator Rotten Tomatoes; the site's consensus states "A B-movie with its tongue planted firmly in cheek, The Core is so unintentionally (intentionally?) bad that it's a hoot." Several reviews cited the numerous scientific inaccuracies in the film. The film made less than half of its production budget back during its time in United States theaters. Internationally it was somewhat more successful; the film made $42,311,715 in the international market and grossed around $73,498,611 worldwide.