The Day After Tomorrow

View source
watch 01:25
Jurassic World: Dominion Dominates Fandom Wikis - The Loop
Do you like this video?
Play Sound
The Day After Tomorrow 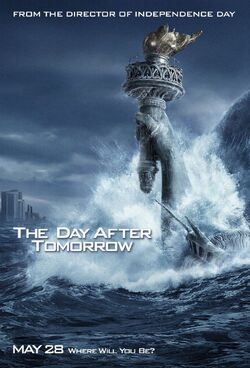 The Day After Tomorrow is a 2004 American climate fiction-disaster film co-written, directed, and produced by Roland Emmerich. The film was made in Toronto and Montreal and is the highest-grossing Hollywood film to be made in Canada (if adjusted for inflation).

in this film Los Angeles was destroyed by tornadoes and New York City was destroyed and engulfed by a tidal wave and froze by the ice clouds.

On an expedition in Antarctica, paleoclimatologist Jack Hall and his colleagues Frank and Jason are drilling for ice-core samples on the Larsen Ice Shelf for the NOAA when the shelf breaks off.

Later, Jack presents his findings on global warming at a United Nations conference in New Delhi, but fails to convince diplomats or Vice President of the United States Raymond Becker. However, Professor Terry Rapson of the Hedland Climate Research Centre in Scotland believes in Jack's theories. Several buoys in the North Atlantic simultaneously show a massive drop in the ocean temperature, and Rapson concludes that melting polar ice has started to disrupt the North Atlantic current. He contacts Jack, whose paleoclimatological weather model shows how climate changes caused the first Ice Age. His team, along with NASA's meteorologist Janet Tokada, builds a forecast model.

Across the world, violent weather causes mass destruction. U.S. President Blake authorizes the FAA to suspend all air traffic due to severe turbulence after learning several tornadoes are decimating downtown Los Angeles. At the International Space Station (ISS) three astronauts see a huge storm system spanning the northern hemisphere, delaying their return home. The situation worsens when the storm system develops into three massive hurricane-like super storms with eyes holding −150 °F (−101 °C) temperatures that freezes anything it comes in contact with. The three cells are located over Canada, Siberia, and Scotland.

The weather becomes increasingly violent, causing traffic-jammed Manhattan streets to become flooded knee-deep. Jack's son Sam, visiting New York City as he is participating in an academic decathlon, calls his father, promising to be on the next train home, but flooding closes the subways and Grand Central Terminal. As the storm worsens, a massive storm surge hits Manhattan. Sam and his friends seek shelter with a large group of people in the New York Public Library, but not before his friend and love interest, Laura, gets injured.

President Blake orders the evacuation of the southern states of the United States, causing almost all of the refugees to head to Mexico. Jack and his team set out for Manhattan to find his son. Their truck crashes into a block of ice, just past Philadelphia so the group continues on snowshoes.

Most of the group taking shelter in the library leaves when the water outside freezes, leaving just Sam and a few others. They burn books to stay alive and break into a vending machine for food. While journeying to New York, Frank falls through the glass roof of a snow-covered shopping mall. As Jason and Jack try to pull him up, the glass under them continues cracking and Frank sacrifices himself by cutting the rope. Laura appears to have a cold, so Sam comforts her and confesses his feelings for her. In Mexico, Vice President Becker hears from the Secretary of State that President Blake's motorcade was caught in the super storm before it could make it to Mexico causing Vice President Becker to be sworn in as the new President.

The next morning, the group determine that Laura has blood poisoning from the cut on her leg, so Sam and two others search for penicillin in a derelict Russian cargo-ship that drifted inland. The eye of the super storm passes over the city and the three barely return to the library with the medicine in time. During the deep freeze, Jack and Jason, who fell unconscious, take shelter in an abandoned Wendy's restaurant.

Upon reaching Manhattan, Jack and Jason discover the library buried in snow, but find Sam's group alive. New York has turned into a polar, subarctic city, completely frozen over by reaching −98 °F (−72 °C). They radio this to the government-in-exile in Mexico and President Becker orders helicopters flown into New York, finding thousands more survivors. Becker orders search-and-rescue teams to look for other survivors as he gives his first address to the nation. The movie concludes with the astronauts looking down at Earth from the Space Station, showing most of the northern hemisphere covered in ice and snow, with one of the astronauts stating "Look at that....Have you ever seen the air so clear?"

The film was inspired by The Coming Global Superstorm, a book co-authored by Coast to Coast AM talk radio host Art Bell and Whitley Strieber. Strieber also wrote the film's novelization. The book "The Sixth Winter" written by Douglas Orgill and John Gribbin and published in 1979, follows a similar theme. So does the novel Ice!, by Arnold Federbush, published in 1978.

The Day After Tomorrow generated mixed reviews from both the science and entertainment communities. The online entertainment guide, Rotten Tomatoes, rated the film at 45%, with an average rating of 5.3/10. The site's general consensus states that it was "A ludicrous popcorn flick filled with clunky dialogues, but spectacular visuals save it from being a total disaster."[2] Roger Ebert of the Chicago Sun-Times, praised the film's special effects, giving the film three stars out of four. Environmental activist and The Guardian columnist George Monbiot called The Day After Tomorrow "a great movie and lousy science."[3]

In a USA Today editorial by Patrick J. Michaels, a Research Professor of Environmental Sciences at the University of Virginia who rejects the scientific evidence for global warming, Michaels called the film "propaganda," noting, "As a scientist, I bristle when lies dressed up as 'science' are used to influence political discourse."[4] In a Space Daily editorial by Joseph Gutheinz, a college instructor and retired NASA Office of Inspector General, Senior Special Agent, Gutheinz called the film "a cheap thrill ride, which many weak-minded people will jump on and stay on for the rest of their lives."

The film were nominated for numerous awards and won four. Karen E. Goulekas, Neil Corbould, Greg Strause and Remo Balcells won Best Visual Effects at the BAFTA Awards. "The destruction of Los Angeles" was named the best action sequence at the MTV Movie Awards. The film won Best Film at the Environmental Media Awards. And Harald Kloser won for Best Music at the BMI Awards.