View source
watch 01:36
We're Getting Mutants in the MCU - The Loop
Do you like this video?
Play Sound

This article talks about the 1972 film, if you are looking for information on the 2005 Film see here. 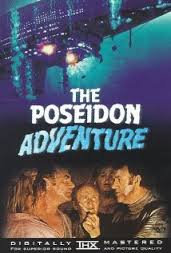 The Poseidon Adventure is a 1972 American action-adventure disaster film, directed by Ronald Neame, produced by Irwin Allen, and based on Paul Gallico's novel of the same name.

A group of passengers struggle to survive and escape, when their ocean liner completely capsizes at sea.

The SS Poseidon, an ocean liner slated for retirement and scrapping, makes her way across the Atlantic Ocean and the Mediterranean Sea from New York City to Athens. Despite protests from Captain Harrison, who fears for the ship's safety, the representative of its new owners, Mr. Linarcos, insists that it make full speed towards its destination, preventing it from taking on additional ballast.

Reverend Frank Scott, a minister questioning his faith and believing God helps those who help themselves, delivers a sermon. Susan and her younger brother Robin are traveling to meet their parents. Robin is interested in how the ship works and frequently visits the engine room. Retired Jewish hardware store owner Manny Rosen and his wife Belle are going to Israel to meet their two-year-old grandson for the first time. Haberdasher James Martin is a love-shy, health-conscious bachelor. The ship's singer, Nonnie Parry, rehearses for the New Year celebrations with her band.

That evening on New Year's Eve 1971, passengers gather in the dining room to celebrate. Harrison is called to the bridge in response to a report of an undersea earthquake. He receives word from the lookout that a huge wave is approaching from the direction of Crete, at 60 mph. He issues a mayday distress signal and commands a "hard left" turn, but it is too late. The wave hits the ship and she capsizes.

In the dining room, survivors take stock of their predicament. Acres, an injured waiter, is trapped at the galley door now high above. With information from Martin, Scott surmises that the escape route will be found "upwards", at the outer hull, now above water. Robin tells him the hull near the propeller shaft is only one inch (2.54 cm) thick. The Rosens, the Rogos, Susan, Robin, Acres, Nonnie, and Martin agree to go with Scott, using a Christmas tree as a ladder. Scott unsuccessfully tries convincing more passengers to join them. After the group climbs to the galley, there is a series of explosions. As seawater floods the room the survivors rush to the Christmas tree, but the weight of everyone climbing causes the tree to fall.

Acres and Scott find the galley, and the survivors make their way to a staircase. Scott climbs its underside, then he and Rogo use a firehose to pull the others up before leading them to an access tunnel. While climbing a ladder inside a funnel, the ship rocks from another series of explosions. Acres falls and is lost.

Climbing out of the shaft, the group meets a large band of survivors led by the ship's medic, heading towards the bow. Scott is certain they are heading for their doom, but Rogo wants to follow them and gives Scott fifteen minutes to find the engine room. Although he takes longer than allowed, Scott is successful.

The group discovers the engine room is on the other side of a flooded corridor; someone must swim through with a line to help the others. Belle, a former competitive swimmer, volunteers, but Scott refuses her and dives in. Halfway through, a panel collapses on him. The survivors notice something is wrong and Belle dives in. She frees Scott and they make it to the other side. While Scott secures the lifeline, Belle suffers a heart attack. Before dying she tells Scott to give her "Chai" pendant, representing the Hebrew sign for life, to Rosen, who in turn will give it to their grandson.

Rogo swims over to make sure Belle and Scott are all right, then leads the rest over. When Rosen finds Belle's body he is unwilling to go on, but Scott gives him her pendant, reminding him that he has a reason to live.

Scott leads the survivors to the propeller shaft room's watertight door, but there is another series of explosions, and Linda falls to her death. An infuriated and heartbroken Rogo blames her death on Scott. More explosions rupture a pipe that releases steam, blocking their escape. Scott rants at God for the survivors' deaths. He leaps and grabs onto the burning-hot valve wheel to shut off the steam, then tells Rogo to lead the group before letting go of it, sacrificing himself.

Rogo leads the remaining survivors — Rosen, Martin, Nonnie, Susan, and Robin — through the watertight door and into the propeller shaft room. They hear a noise above the ship and bang on the ceiling/floor to get the rescuers' attention. The rescuers cut through the hull and help the group out of the ship. The survivors, the only six alive after the disaster, fly to safety by helicopter.

The film received positive reviews and earned estimated rentals of $40 million in North America in 1973.